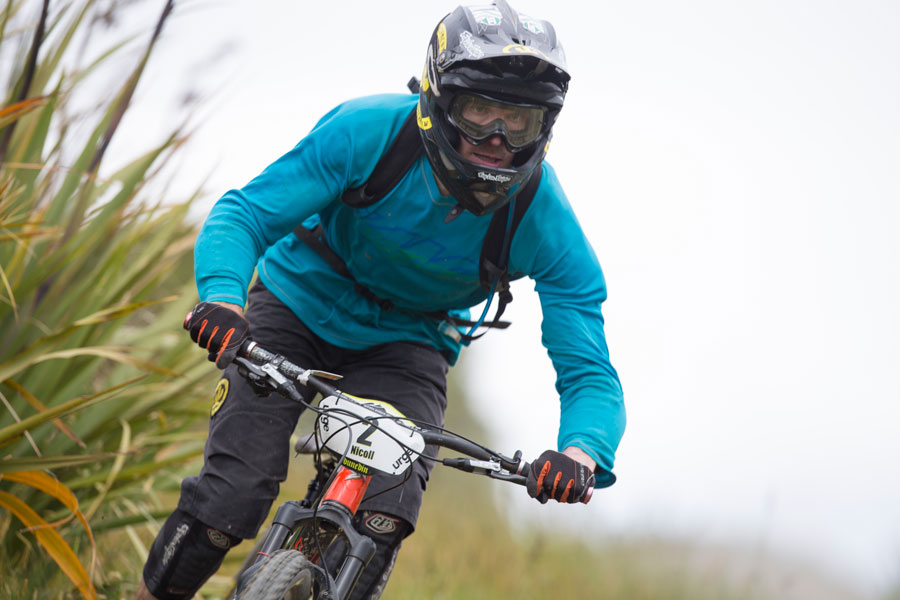 Jamie Nicoll, of Dunedin, emerged victorious at the 2013 Urge 3 Peaks Enduro, despite close competition from professional riders Anton Cooper and Justin Leov, both of Christchurch.

Nicoll, who is considered the fastest privateer enduro rider (self-funded) in the world after his results in the 2013 Enduro World Series, relished the opportunity to race in Dunedin.

“We don’t have the massive descents in New Zealand that you get overseas, but this is a great event with some nice technical sections and some great terrain,” Nicoll explains.

He said the calibre of riders helped to make this a quality event.

“Justin Leov is a fellow Enduro World Series racer and I raced with Anton Cooper in the Trans-Provence [France] this year and he is a great rider who really knows how to hammer. Then you have all those Kiwi shredders who ride really well and could pull a top result quite easily.”

Nicoll said he loved the rockgardens on Mt Cargill the best and added that riding Signal Hill in the dry was quite a rare event for him.

“Normally it is wet and slippery and you just can’t ride the lines that were on today.”

Following on from his success from the 2013 season Nicoll has been offered contracts for 2014. Insiders speculate that he will have signed with a team within the week.

Nicoll will be training in Queenstown for the summer in preparation for the first round of the Enduro World Series to be held in Chile in April 2014.

“I didn’t know the tracks at Pineapple or Cargill as well as I should have considering I lived here,” offers Leov, who crashed in the first stage today.

Leov said he was happy with how he rode today and that the event had helped him identify the areas he needed to focus on in his training “to be ready for the Enduro World Series next year”.

He said the toughest sections of the Urge 3 Peaks Enduro were the rockgardens on Mt Cargill.

“Compared to the European enduro races, the top of Mt Cargill – the rocky trails – are probably the closest,” he offers.

As far as the future of enduro mountain bike racing goes, Leov can see this event is perfectly positioned.

“I can see this event growing and attracting more and more international riders in years to come.” 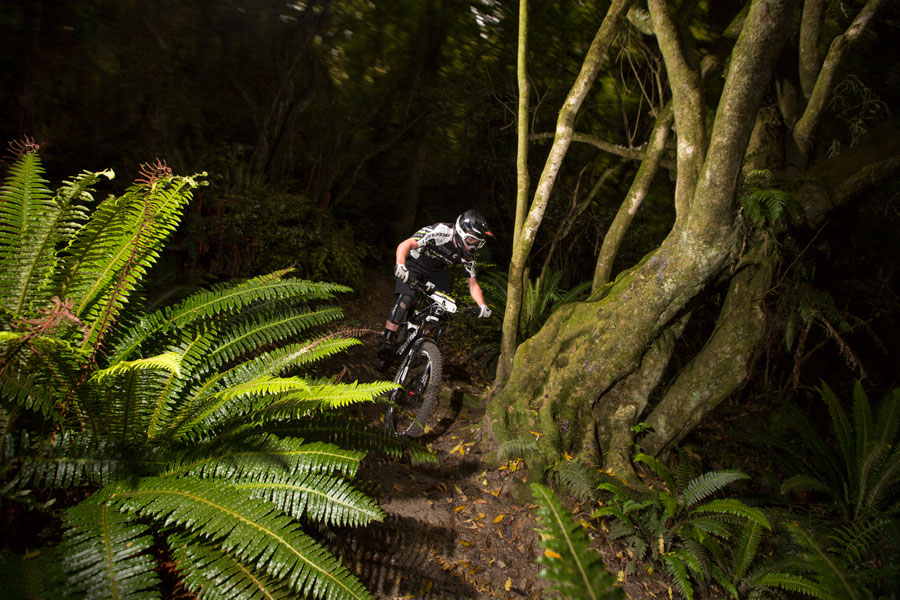 For Anton Cooper his perfect debut at the event came undone in the closing minutes of the final stage when he threw his chain in a rough section of trail.

“I really had a good time – it’s such an enjoyable event. I love pedalling uphill and riding fast downhill so an event like this is a lot of fun for me.”

Cooper, who was 2012 World Junior XC Champion and one of the world’s most promising U23 XC riders, is also renowned for his skill in descending. He was one of the hot favourites to win the 2013 Urge 3 Peaks Enduro.

“I didn’t feel a lot of pressure, but it is an event I personally wanted to do well in – it just frustrates me that I was so close, but that’s racing.”

Cooper is base training over summer and will take in the NZ Nationals on February 15, 2014, where he will be looking to defend his title before a training stint with the Cannondale Factory Racing in the States in March ahead of his World Cup XC season with the team.

Another battle loomed in the women’s event with late entry Sarsha Huntington – a former Australian 4X Champion and World Cup Top-10 regular changing her family’s holiday plans in New Zealand to include the Dunedin event.

“I flew in on the day of the urban stage, raced it and then my son kept us up all night because of the travel,” she laughs.

Her son Bryce and husband Randal also raced the enduro, she said.

“I loved the first and the third stage today, but the staircase on Mt Cargill was really technical. When you’ve never seen it before and you really want to go bungy jumping in a week’s time you don’t want to risk it so I took it easy down there.”

The Brisbane-based rider runs an events and promotions company back home and was impressed by the Urge 3 Peaks Enduro organisation.

“The event is amazing – I mean we have ridden through the hills from one side of Dunedin to the other – I wish we could have events like these back home.”

With Bryce blowing his wheel apart on one stage and Randal stopping to assist, Sarsha was the only Huntington to reach the finishline.

“I can gloat for the rest of the holiday that I was the one that finished,” she laughs.

“I was happy to leave him [Bryce] – what a good mother I am,” she added with a chuckle.

Sarsha said the girls in New Zealand were incredible in this discipline.

“They are just so fast.”

Defending her title succesfully, Olympian Rosara Joseph, of Wellington, said the event was a lot of fun for her.

“I really enjoyed each run,” she offers.

“The first stage today was physically very challenging and I ended it puffing really hard.”

While Joseph won the event last year she said she didn’t ride the steps on Mt Cargill and that was a goal for her title defence.

“I really wanted to ride the steps on Mt Cargill and I managed to do that this year. The last stage on Signal Hill was a downhill track and it was a really cool way to finish.” 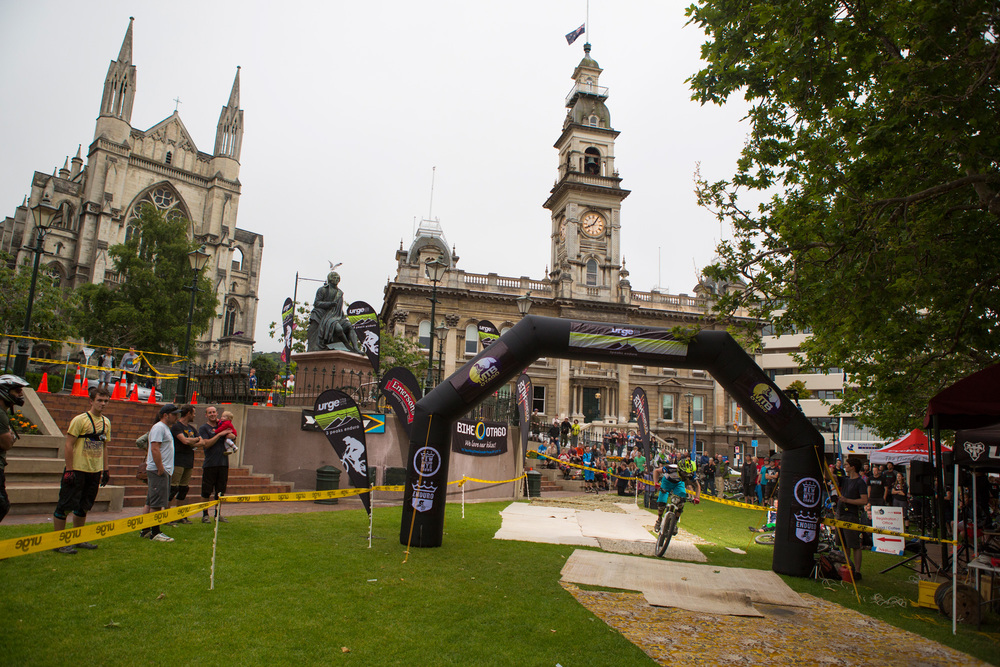 Joseph, had more challengers this year for the title and she welcomed the added pressure.

“It’s good to see more girls travelling to do these races – you always have interesteing chats going up the hills.”

She said with the tracks on par with Enduro World Series courses everyone who rode them blind should be proud of their achievement.

“They are tough and to ride these blind is quite difficult.”

Joseph hopes to ride the entire Enduro World Series in 2014.

Local women’s favourite Anja McDonald encountered a few glitches in her campaign for 2014.

“I had a few embarassing moments these past two days,” laughs McDonald.

“I took the first set of steps at the finish of the urban stage and ended up on the wrong side of the tape and the timing arch in front of everyone. I had to run back up the steps to finish. Then I rode off Conrod Straight on the Pineapple Track and fell down the bank and then I had a wee lie down in a rockgarden on Mt Cargill.”

“But my Signal Hill run was clean,” she laughs.

McDonald said the urban stage was very exciting, but also nerve-wracking – “that course scared me the most”.