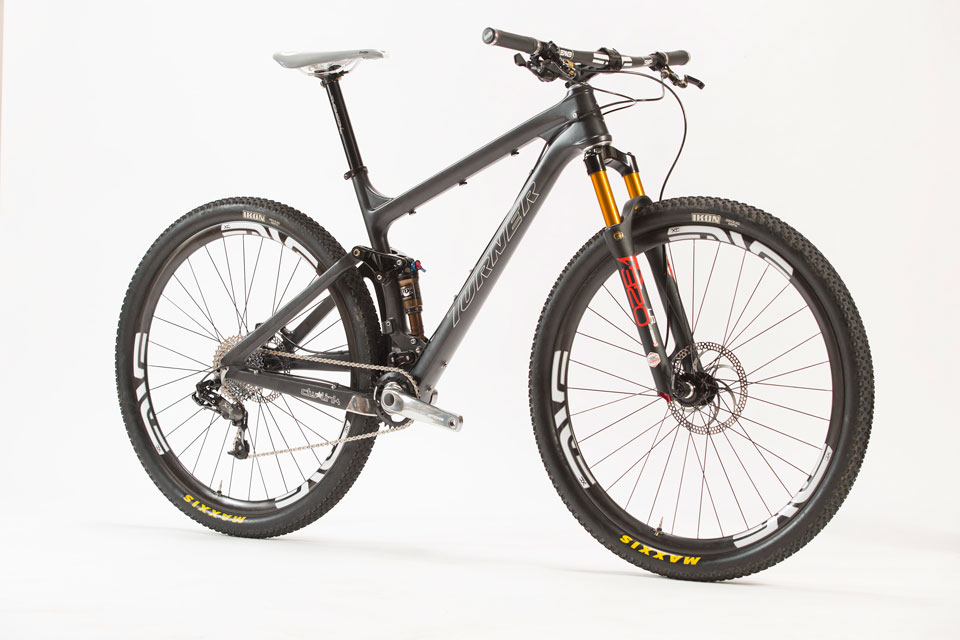 Every year Matt and the boys at Wide Open Distributors host a bunch of dealers in Rotorua for their annual product launch, but this year a warehouse shift and a bunch of other things got in the way so they decided to bring the launch direct to you, but via the Spoke HQ. Legendary road wrench and Wide Open rep Kris ‘Grom’ Withington showed up at the office yesterday afternoon with a van load of goodies to check out and we headed into the Spoke studio and started snapping. First onto the floor was this absolutely stunning 29″ wheeled Turner Czar, living up to its dignified name immediately. It’s a full carbon frame that sports 100mm of DW Link travel out back and some very cool little details throughout. It comes equipped with a Fox CTD Kashima Shock and retails for $3999. 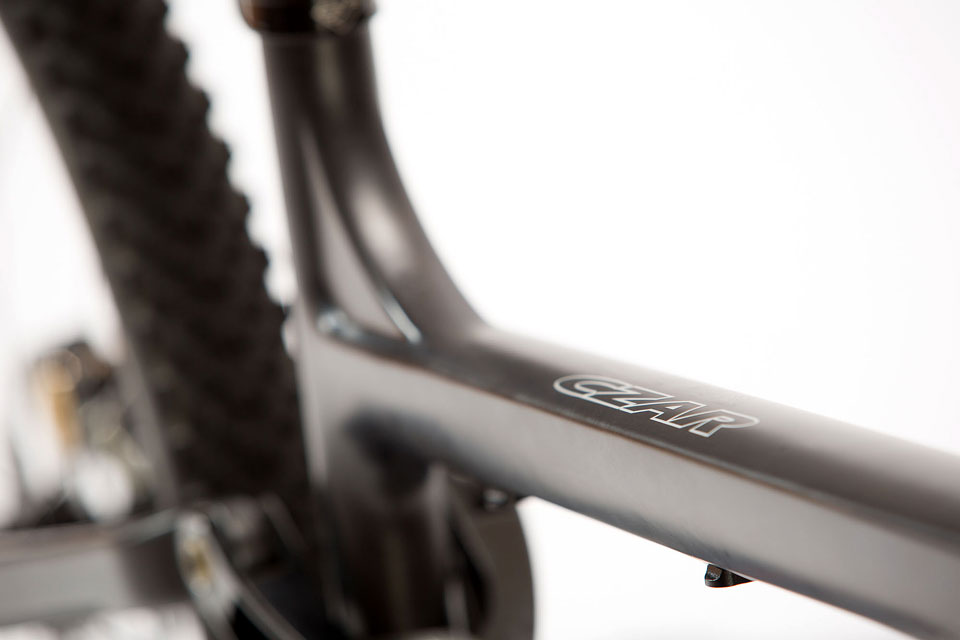 You say Tsar I say Czar… For the debate over which spelling is correct head here. 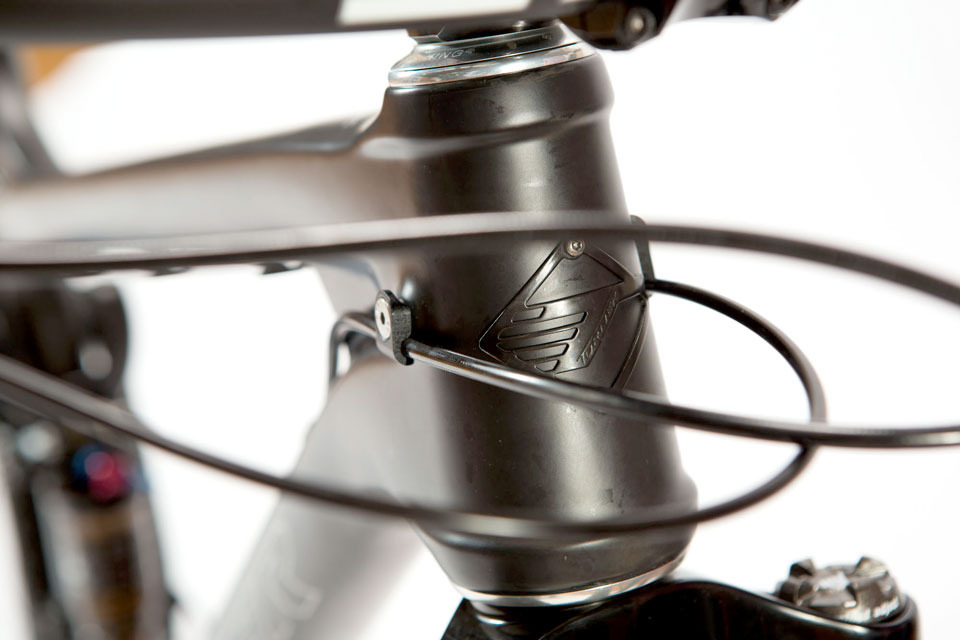 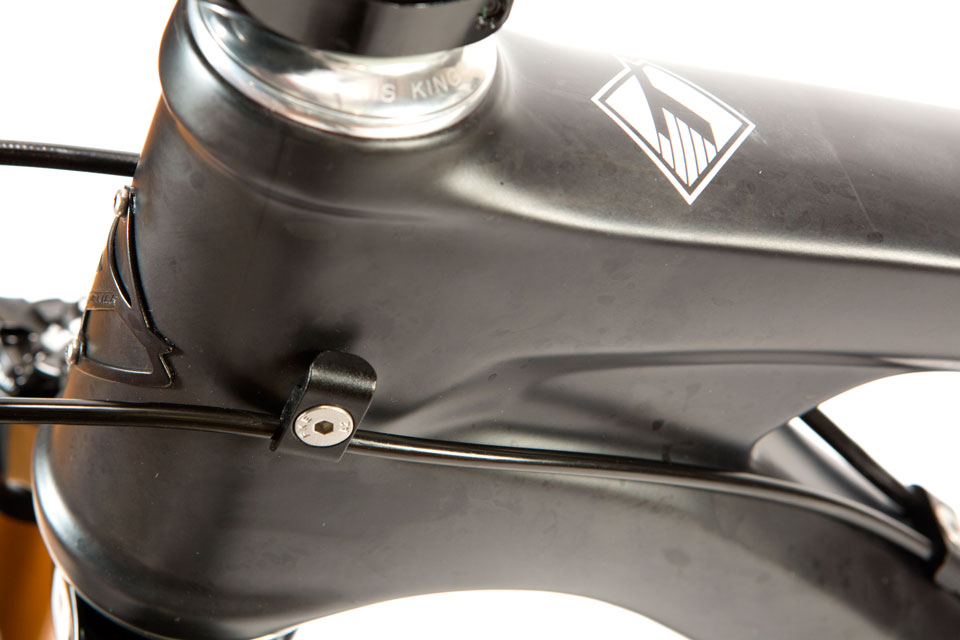 There’s no fancy internal cable routing here but there is perhaps the most well resolved external routing we’ve ever seen here at Spoke; both sides of the headtube sport cable guides that will eliminate that dreaded rub on the headtube and on the fork crown. So simple! Why doesn’t everyone do it? 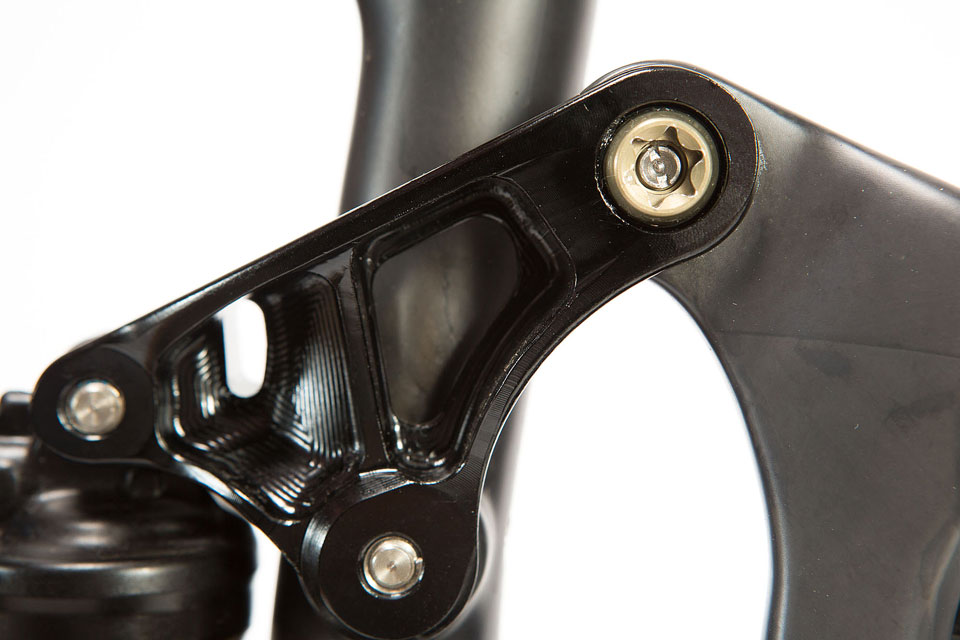 Turner were one of the first bike manufactures to make production bikes with grease ports, and now even the the upper linkage sports one, hiding inside the Torx bolt even! 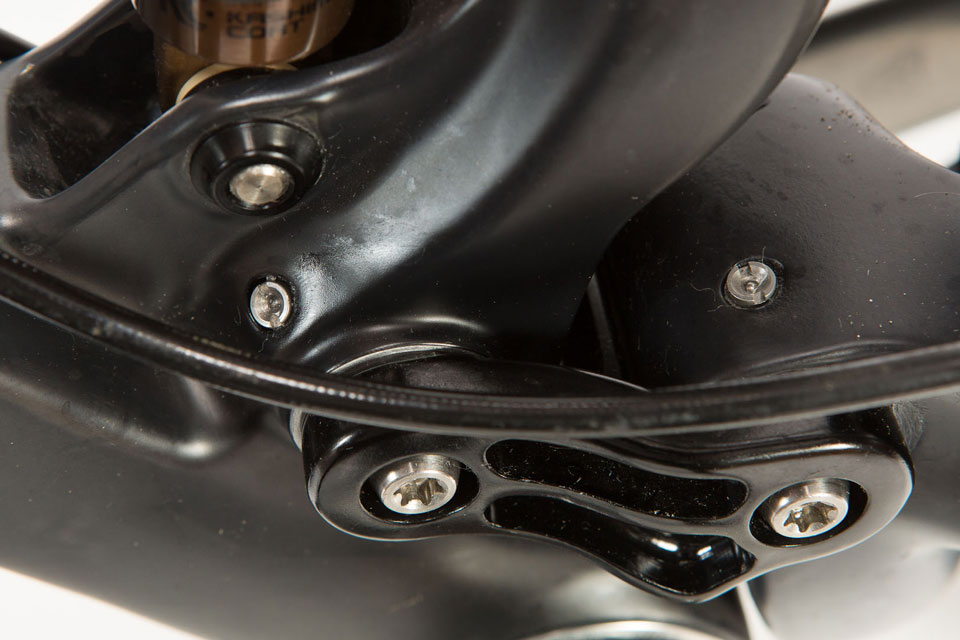 The lower linkage gets lube points as well to help keep your DW Link running perfectly. 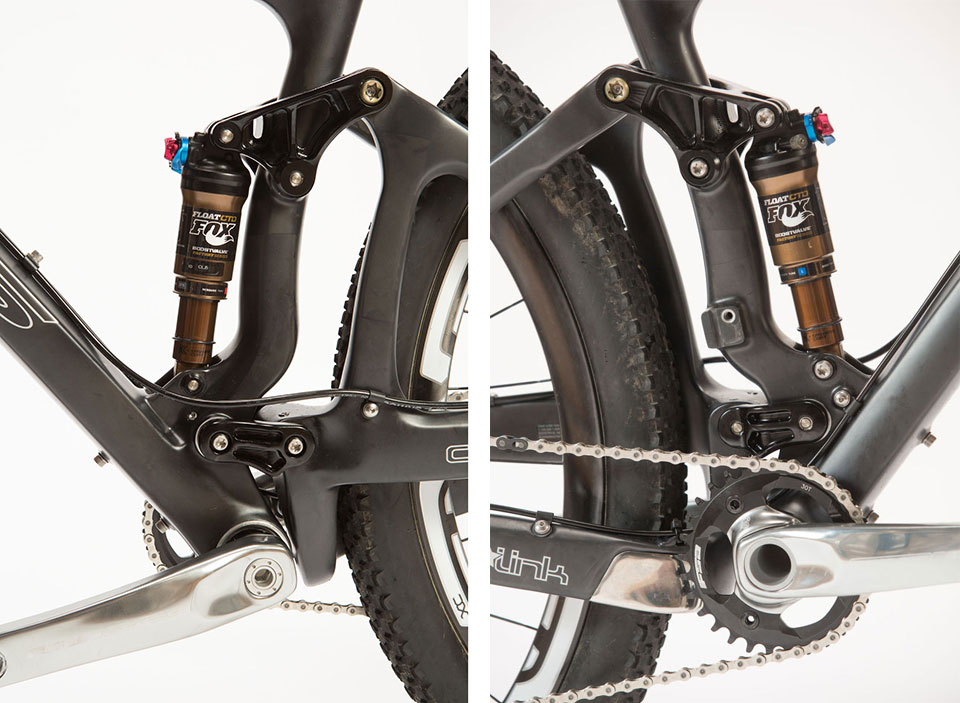 Turner has been rocking the legendary DW Link suspension platform for a while now and the whole seat tube/linkage area just looks perfect. The black linkages with flat black carbon just work! Oh, look at that, if you feel like running a two-ring setup it even comes with an E-type direct mount for a front mech, how quaint. 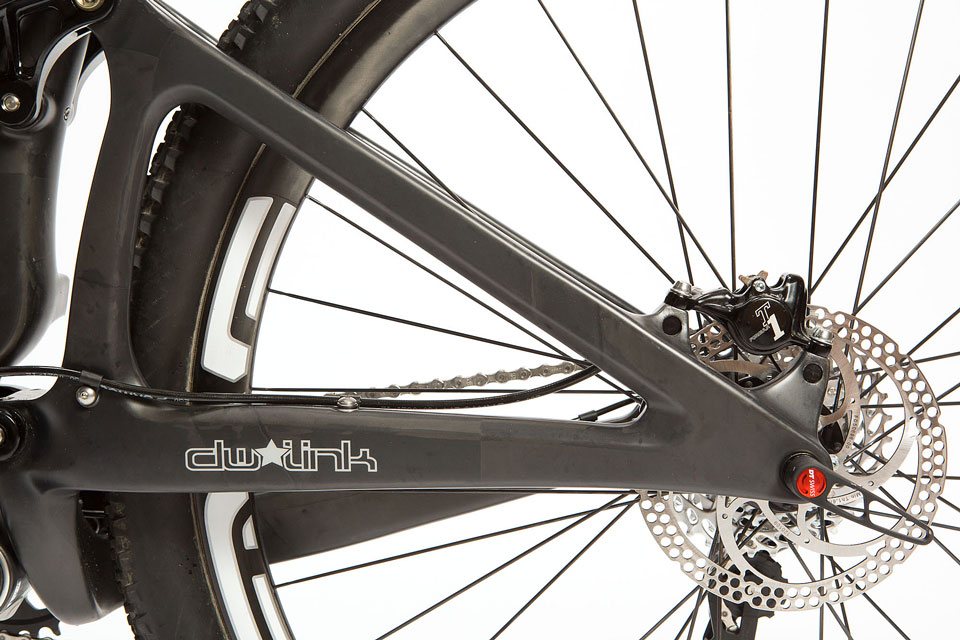 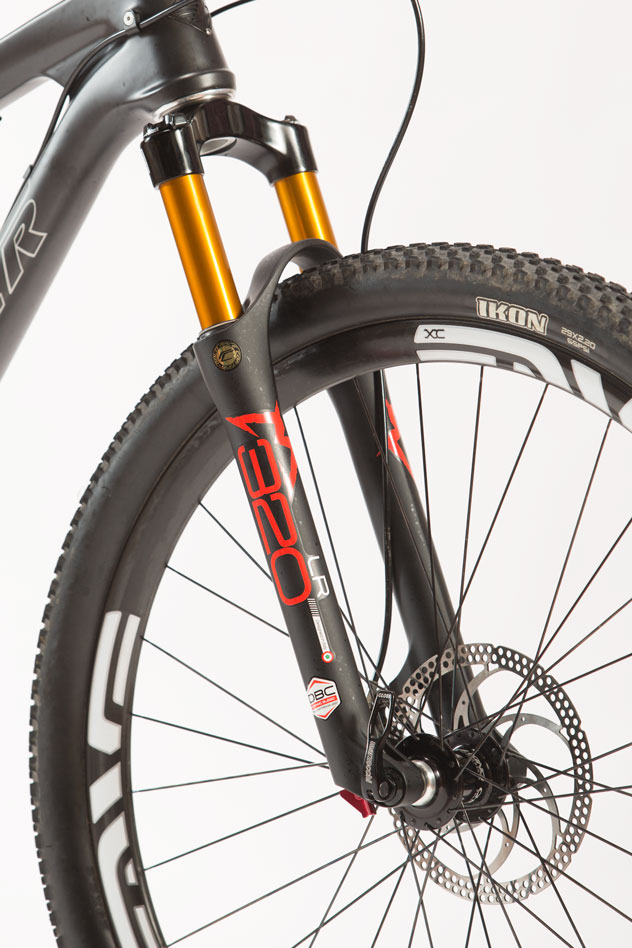 And you may have noticed from the main bike shot up top that the fork is not one you will have seen, it is in fact Marzocchi’s new 29er 320LR. All of the 3X0 forks (320, 350, 380) are the new generation of Marzocchi forks with new lowers and crowns to reduce weight, as well using “Dynamic Bleed Cartridge” damper technology (DBC). DBC is borrowed from motocross cartridges. It is a sealed unit (gone are the open bath dampers) which uses a spring backed IFP, to make it self-bleeding. This is much more reliable than a bladder or gas charged IFP and very simple to service, while keeping all the consistent damping of a sealed cartridge. Retail on the 320LR is a ridiculous $740. 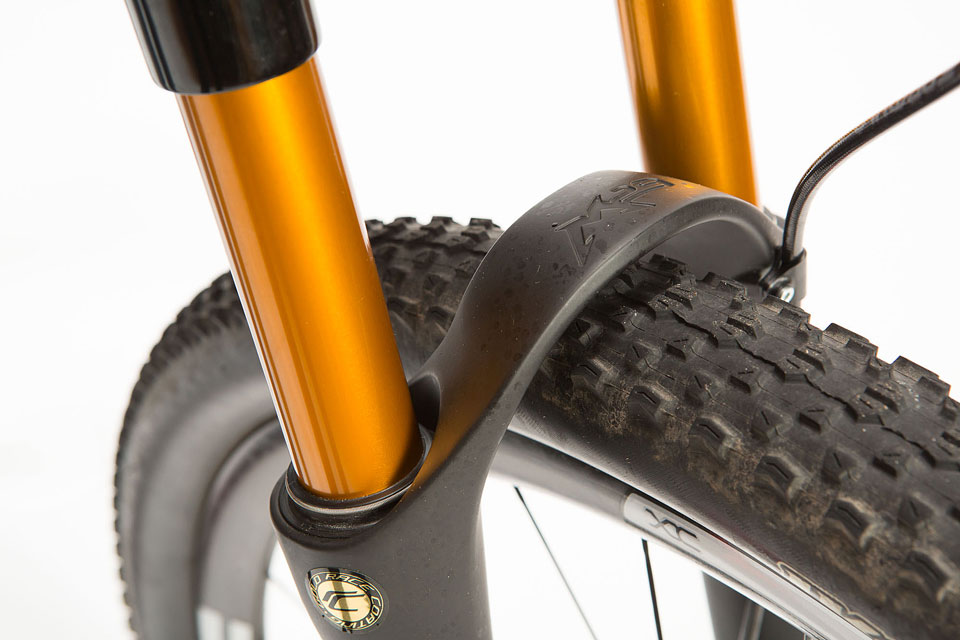 The 32mm stanchions are sporting gold race coating, which uses Teflon to increase small bump sensitivity and increase durability of the bushings and seals. And how about that new arch? The new arch does away with the classic “M” styling and bomber name to create a much lighter package without losing any stiffness, while increasing mud clearance. 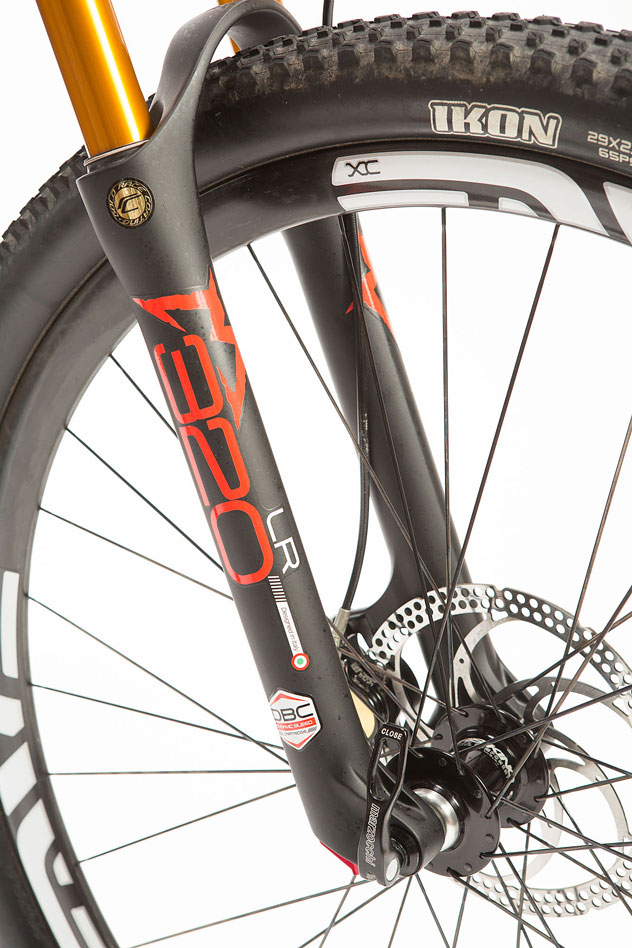 The 15mm axle equipped fork features an AER air spring with coil negative for simple adjustment and a smooth feeling through the whole stroke. Travel comes set at 100mm but can be easily changed to 80 or 120mm. 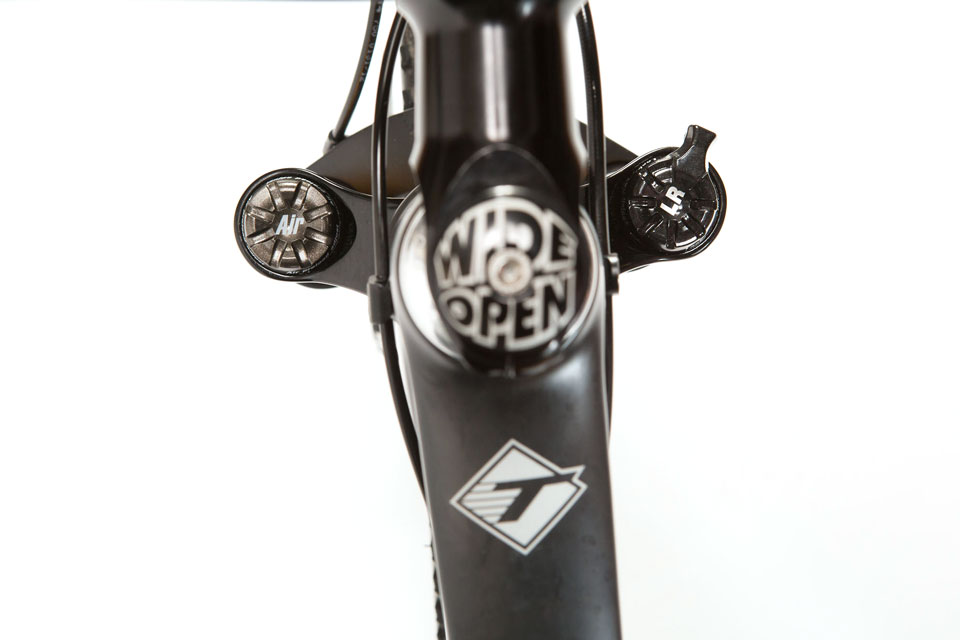 The LR version seen here is the price point fork with a simple lockout and rebound adjustment, and weighs in at 1880g. It’s available in 29” only, while the Corsa LR uses similar internals but QR axle for 26” wheels. 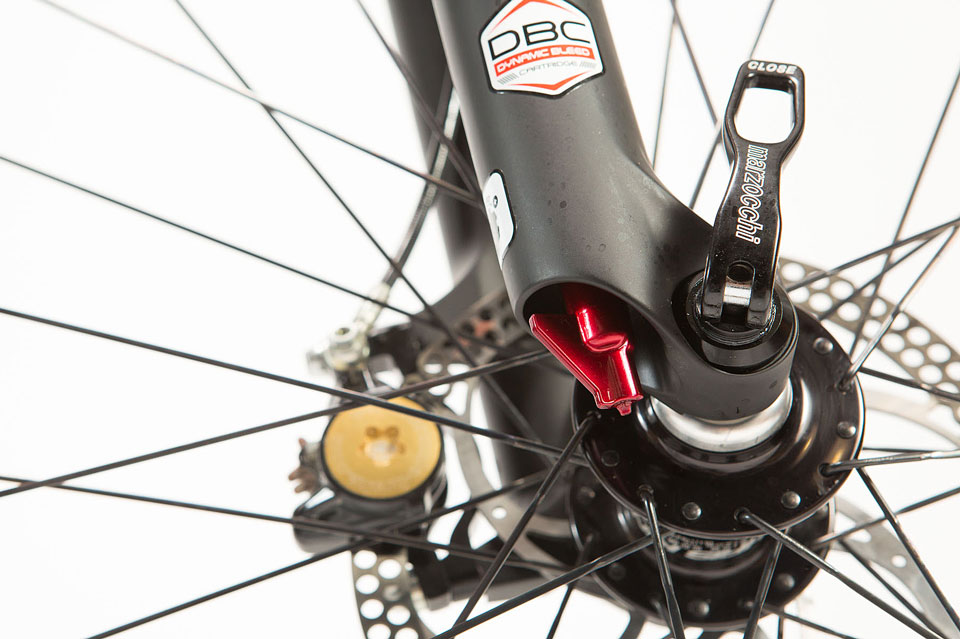 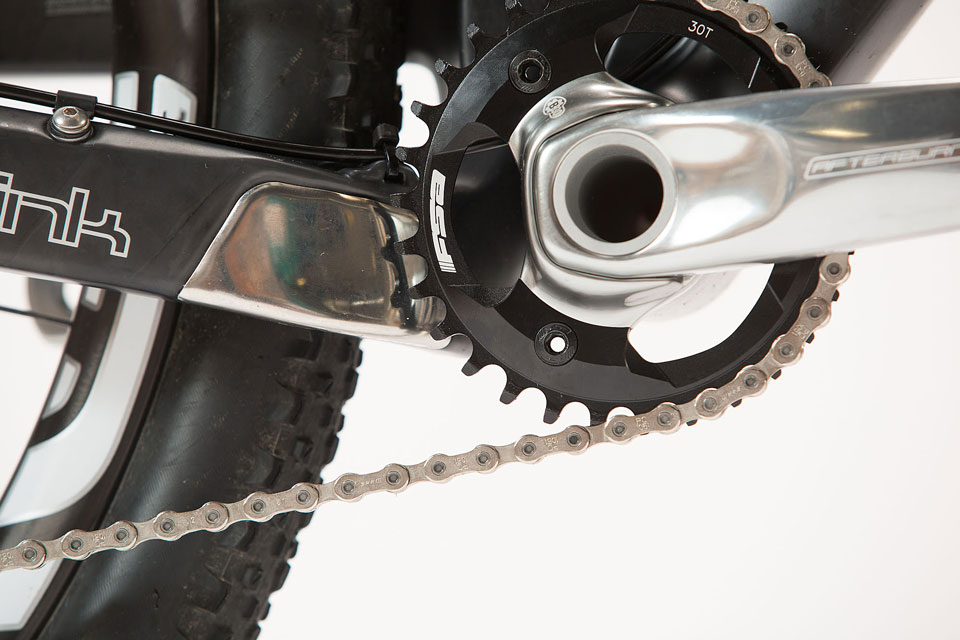 While pretty much every other chainring manufacturer is putting their eggs in the narrow/wide basket, FSA have gone a different route and produced their MEGA tooth chainring. Its goal is the same, stop the chain from dropping in single ring setups but it achieves it by rocking an extra tall, slightly hooked tooth profile for chain security. It’s 9, 10, 11 speed compatible and comes in 86 and 104 BCD. Pricing is yet to be confirmed for NZ. 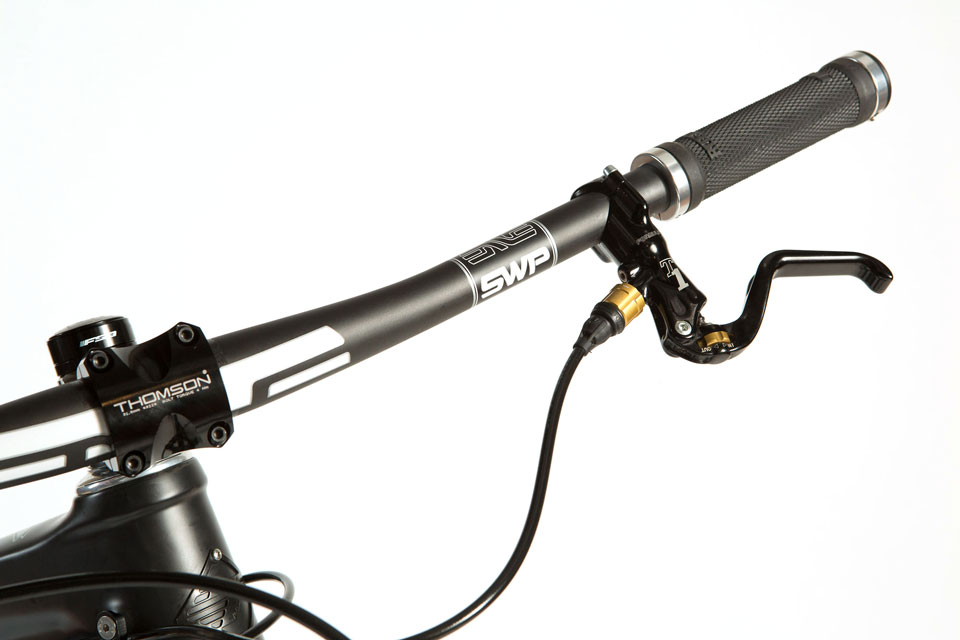 And just because they happen to distribute some of the coolest brands out there, the build of this bike is finished off with an assortment of Thomson, Enve and Chris King sexiness! This ENVE Sweep flat bar being a prime example, coming in at 740mm wide it weighs 180 grams and features 9 degree sweep. RRP is set at $259

Holding that is the classic Thomson X4 stem, machined from a single piece of aluminium and available in a range of lengths from 50 through to 130mm (new for Thomson is a 60mm length) and with a choice of 0 or 10 degree rise. Weight from 141 grams (70mm) RRP $128. 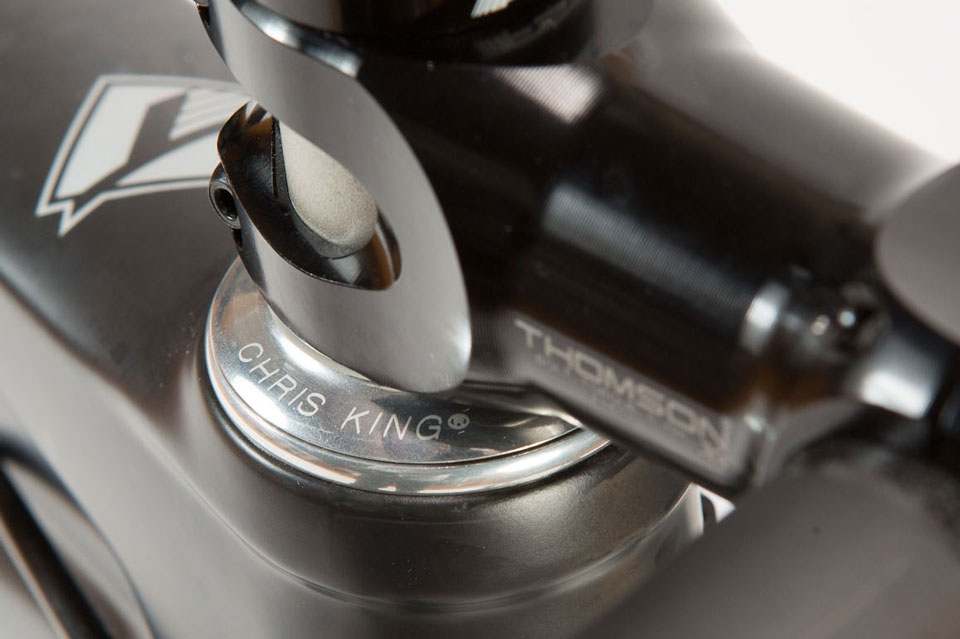 If it spins on this bike it’s spinning on Chris King. Up top you have an internal headset but there’s a huge range of head tube fit options available, throw in a 10 year warranty, nine different anodised colours and the fact that it’s ethically 100% made in the USA and you have one hot set of bearing cups! 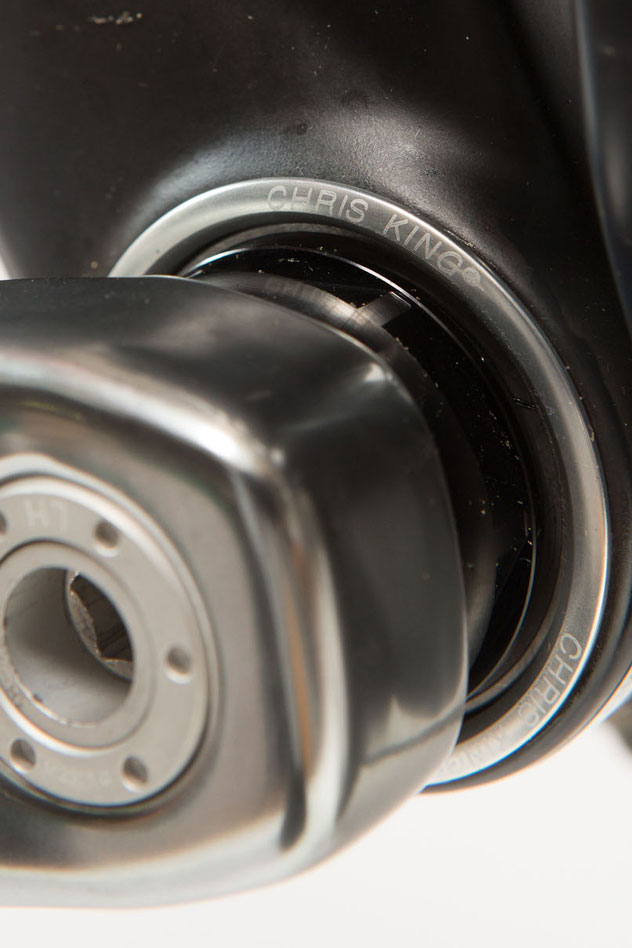 The cranks spin on a Chris King press-fit PF30 BB, they are a fully serviceable design, come with a 5 year warranty and are available in nine anodised colours and in an option of stainless or ceramic ball bearings. Adapters are available to suit Sram GXP and 24mm cranks such as FSA, Race Face and Shimano. RRP From $276. 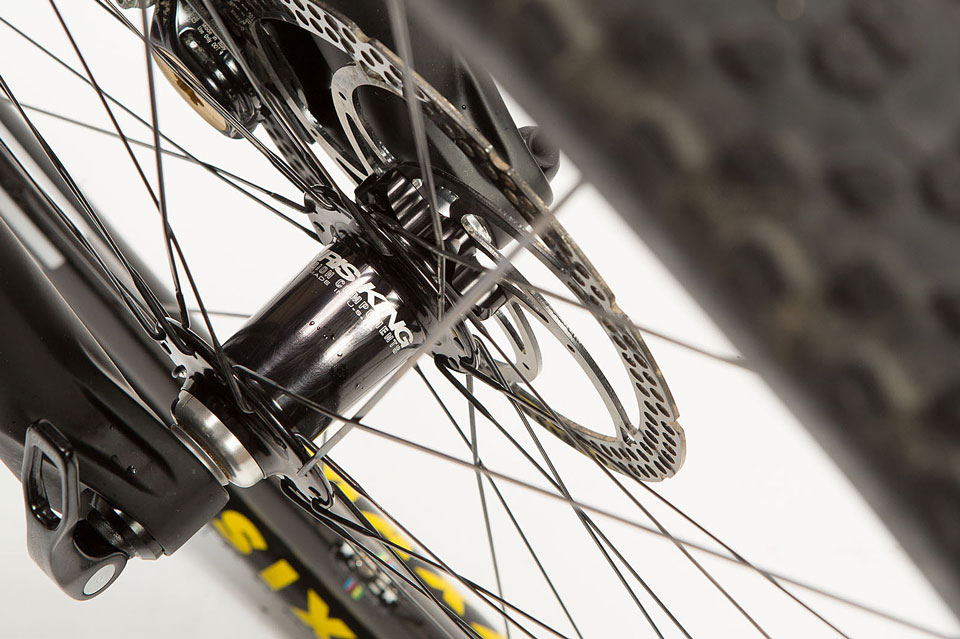 Chris King hubs… do we really need to tell you anything about these? 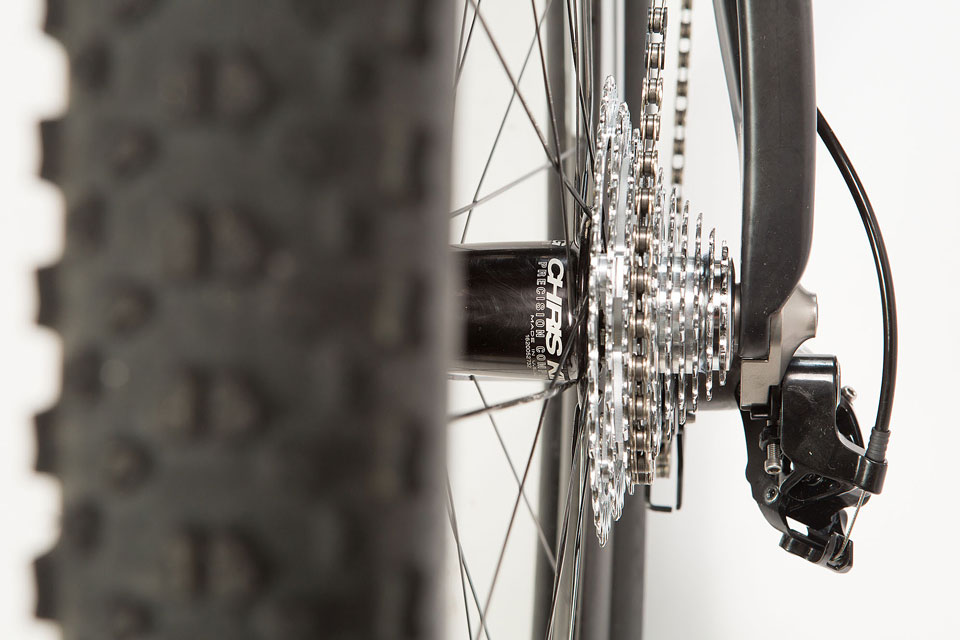