Last weekend Pivot hosted Spoke up in Rotorua for a few spins of the cranks aboard their all-new Firebird. With no prior knowledge of what to expect I guess you could call this unveiling a surprise. I’m not much of a surprise person as I’ve never been about to hide my feelings for whatever I am being surprised with, this includes my distaste for the surprise. My awkward silence and lack of eye contact lets everyone know straight away that I’m not stoked.

When I walked into the Firebird launch my surprise anxiety settled as I spotted the new rig and realised it had been given the tasteful Pivot treatment that the other models in the range had recently received. As we were run through the Firebirds features, I realised that Pivot’s product developers had spent their time repositioning the firebird, rather than reinventing the popular enduro model. It has been 4 years since this model has had an upgrade and in that time the rest of the models in the range have become more capable and left people wondering why they would buy the Firebird when they could get a Switchblade or even the Trail 429 enduro spec. This mixed with the ever-increasing difficulty of Enduro trails has pushed Pivot into creating a bike that sits closer to their DH model the Phoenix. The Firebird is now longer and slacker, giving the rider confidence to ride through the rough at higher speeds.

Pivot also made the intelligent decision to change to size specific chain-stay lengths, which is a great way to give the bike back a little more of that playfulness it may have lost when the wheelbase got stretched out. The result is a significant improvement in ride quality for all riders but especially those riding size SML and XL.

I’d be lying if I didn’t say I half expected to be testing a mullet bike when I showed up in Rotorua but I was pleasantly surprised to find a straight 29r with the capability to swap to 27.5 in the rear if that’s your jam. No after-market linkage needed, just change to flip chip to high and enjoy the benefits of riding MX. It also comes as no surprise that the firebird is still running the Dave Weagle linkage layout which has quickly become a favourite of mine as I often notice a bike climbing efficiency more than its descending performance.

In the suspension department Pivot continued their trend and changed to a vertical shock mount. This is a welcome change as there is now more room in the front triangle for water, tools and supplies for races or just a pedal into the mountains.

All in all, I’m very impressed with the changes Pivot have made to the Firebird. They have clearly been reading the forums and listening to their customers. The simple changes to shock mount and chain stay length have made the Enduro model more rider friendly. In the past I’ve shied away from picking up an enduro bike because they often felt clunky and pedal deficient. With bikes like this coming through I’m excited to see how enduro riding develops and I’ll be keeping an eye on the Pivot team riders to see how this updated rig performs on the world stage. We’re going to be riding the firebird as long as we are allowed and we will be back with a more in-depth review of it in September’s issue of Spoke magazine. 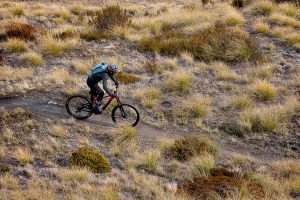 The M.U.L.E Pro 14 is an impressive offering in the ever-evolving world of MTB carriables. With 11L of storage and 3L of water capacity making up the 14L total.

It works! It’s light enough, durable enough and offers enough performance to make upgrading to its more expensive stablemates more a matter of desire, rather than need

Green and Goldilocks…Is this the quiver-killer we’ve been waiting for?

Not long ago the Shonky was simply a dirt jumper—a stylish, steel-framed 26” hardtail designed to session the local jumps.