It seems like the ability to get rowdy on trails no longer hinges on owning a longer travel big rig. Don’t get me wrong, there’s nothing like a plush ride you can take to the bike park and plough down any trail feeling like the next EWS star. However, there’s style of riding that’s emerging in the techy pedal parks of Aotearoa that requires a bike with a lot more versatility – a bike that rides fast uphill as well as downhill. Whether you love or loath the term ‘down-country’, it’s quickly becoming a big deal, with many riders finding it offers the ideal sweet spot and provides plenty of big grins with a little less risk.

So when Pivot sent us their new genre-bending Trail 429 I was curious to see how it fitted into the down-country spectrum. Straight out of the box, one thing was obvious about its DNA: this lightweight 130mm front, 120mm rear whippet was going to encourage aggressive descending.

The other noticeable change on the third-gen 429 is Pivot’s completely revised shock mounting position. It has transitioning from a horizontal configuration to a vertical trunnion mount, which has allowed them to drop the standover height. This has optimised the space for longer dropper posts, and in turn, created more room in the front triangle for on-bike storage and allowed for a flip-chip to be integrated in the linkage. 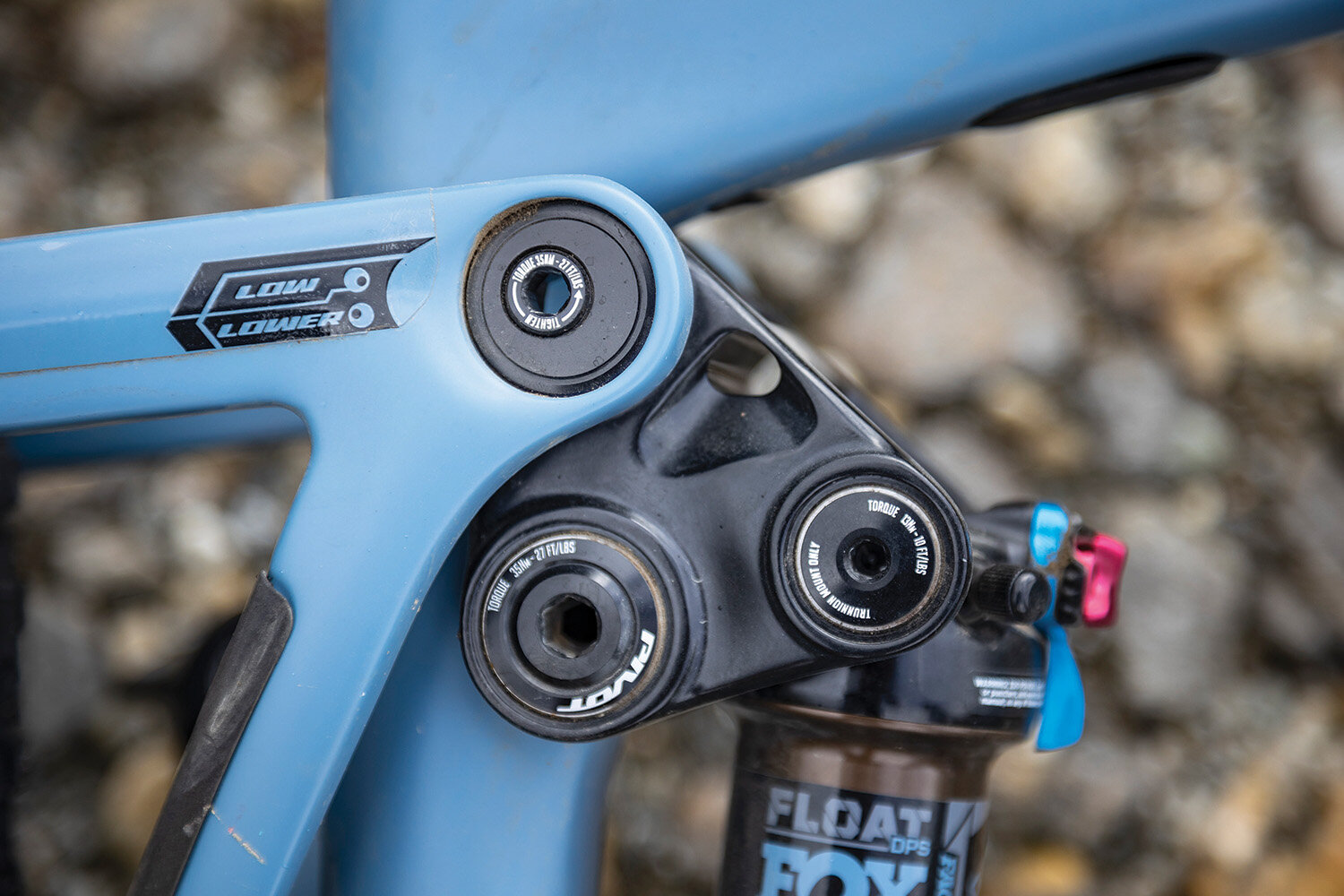 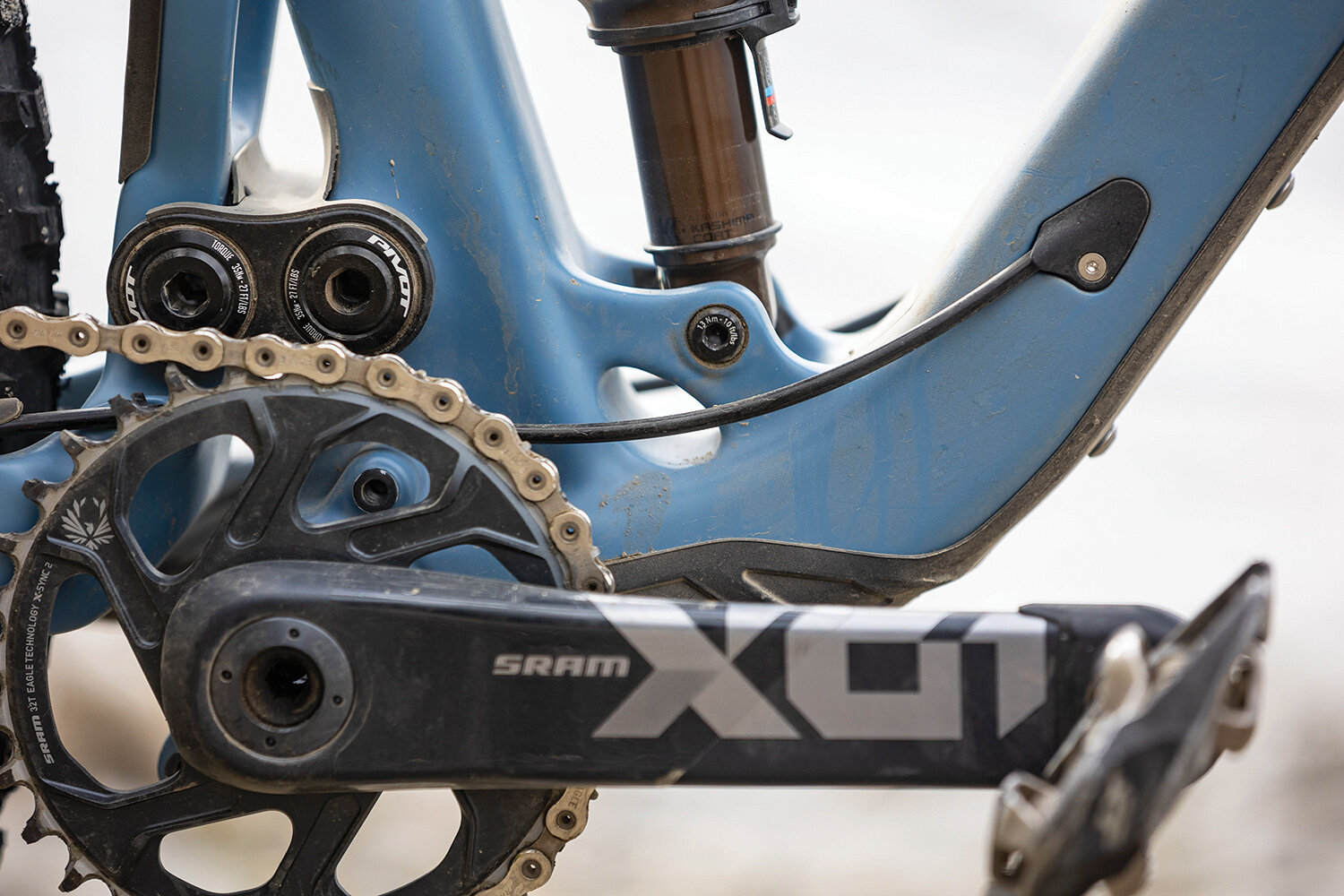 The 429’s geometry oozes more of that descent-loving DNA. My medium test bike blended the combination of a short 394mm seat tube, (which allows you to dump the 150mm Fox Transfer dropper down really low), a long 460mm reach (forcing your weight forward and down), and a slackened 66-degree head angle. Together, this puts you firmly in the attack position especially in steep terrain. But how does this translate to normal trail riding? Well, you feel like you’re positioned ‘in’ the 429 not ‘on’ it, so when speeds are high and the terrain gets a little sketchy, the 429’s geometry really starts to shine.

Like anything new and different the Pivot’s long reach did take some getting used to, especially in corners, but I found that the combination of a short back end (430mm chainstays) and stiff super-boost rear wheel helped to counteract the long front. After a few sunset rides I bonded seamlessly with the 429 and it started to feel very normal.

The 429’s flip-chip promotes versatility and ensures riders can have even more say about how they want their bike to adhere to their preferred style of riding. The two settings are low and lower; on the surface the options seem classed as ‘racy’ and ‘rowdy’, but it could also be used to run a mullet setup for you want to get the best of both wheel-size worlds.

To ensure I got the most fun from the Pivot, I rode with the ‘lower’ flip-chip setting for most of the test, mainly because I felt it suited the bike better and I’m not chasing any Strava fame. If I was, I’d only be gunning for fast downs on the 429 as I feel the bike’s capabilities do favour descending over really rapid ascending. That said, it’s no slouch uphill or on the flats, but the grins really start emerging on descents.

The Pivot’s capabilities on the downs are only the start. For me, it was all about versatility; during the week I could have the Pivot set up for getting the most out of the techy local trails, but come Friday night, I could flip the chip, dial in the suspension, change a tyre or two, and suddenly the 429 wouldn’t feel out of place at a weekend XC or marathon event. Sure, it’s not an elite XC race bike, but the beauty of the Pivot is that it minimises the amount of bikes you need to buy, learn to ride, service and insure. As modern as the Pivot is, its fundamental idea is very old. Own one bike, ride it everywhere, have heaps of fun.

The Trail 429 family is offered in both Shimano and SRAM builds, so you can spec your bike with your favourite kit from the two big players. Pivot’s base build sits at $10k, but there are options all the way up to their Team AXS Live Valve model that sits at a casual $20k. Browsing over the spec sheets of the 429 family, it’s hard to fault any of the builds and there’s certainly something to suit everyone.

One option that caught my eye was the Enduro model. It’s built around the same chassis, but comes with a 140mm travel Fox 36 fork (an additional 10mm) and a Fox DPX2 shock. These tweaks also make it half a degree slacker (65.5°). Having experienced the aggressive ride feel of the standard model, I’m unsure if the Enduro would even fall into the down-country category; it’s really pushing the boundaries or potentially creating a whole new genre of bikes.

My test bike came with the Pro X01 build that utilises SRAM’s faultless X01 Eagle drivetrain and a combo of Fox’s Factory 34 and Float DPS suspension. The braking department featured SRAM’s G2 RSC. With a lot of down-country bikes coming specced with two-pot brakes, it was nice to see these four-piston stoppers, which, again, is a testament to the bike’s DNA. The G2’s initial bite felt very gentle, which isn’t my personal preference, but this can certainly favour wet and slippery conditions where you really don’t want sensitive brakes locking up.

Although I couldn’t fault the DT Swiss wheelset, I found the Maxxis Dissector tyres to be an interesting choice. The Dissector features a tightly-packed centre knob arrangement coupled with big side knobs. These tyres do favour more committed riders who lean the bike over enough to bridge the dead space between the centre and side knobs. This may suit some riders, like downhill pro Troy Brosnan, who worked with Maxxis to design the Dissector, but I’d be inclined to run something more evenly spaced, especially up front. 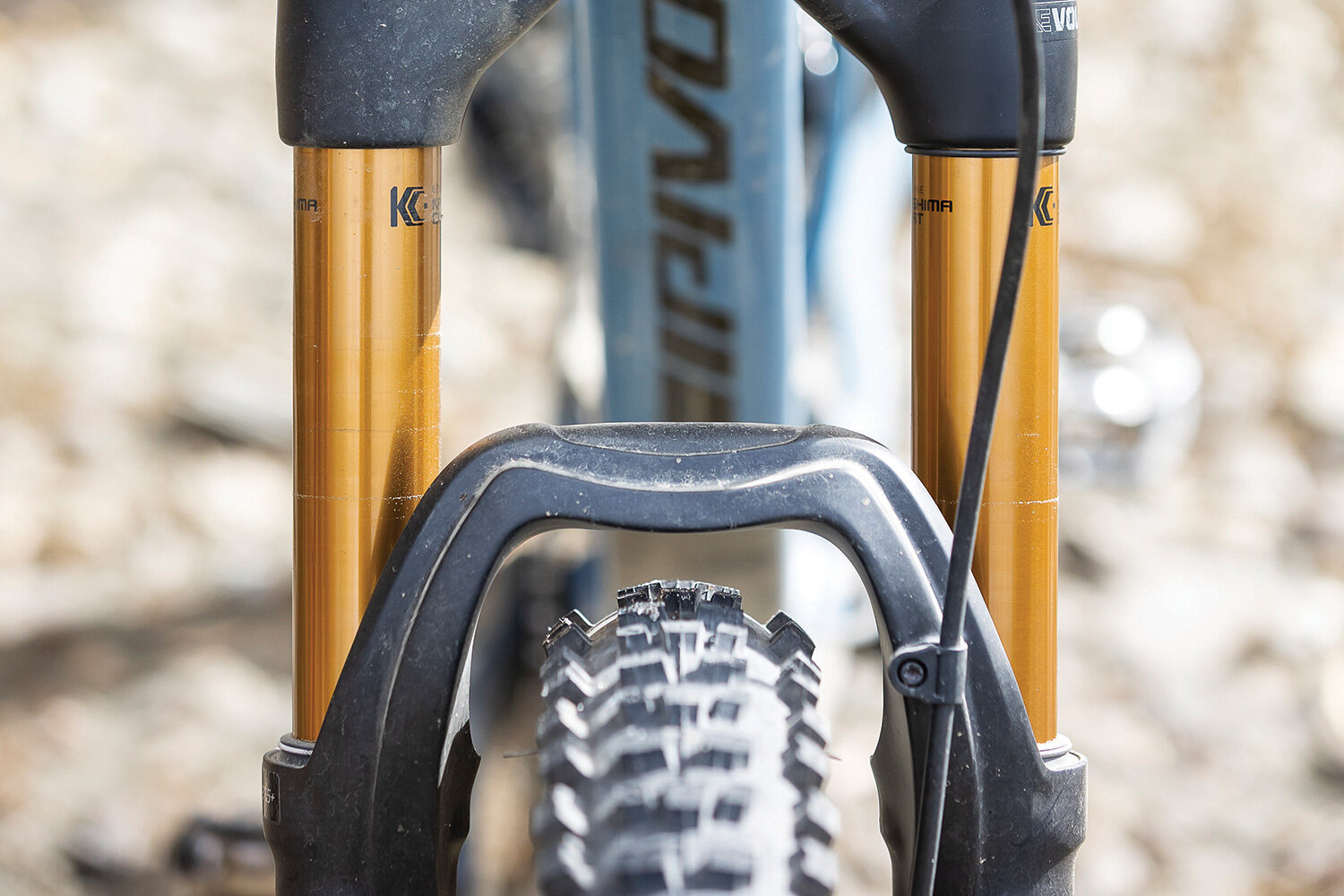 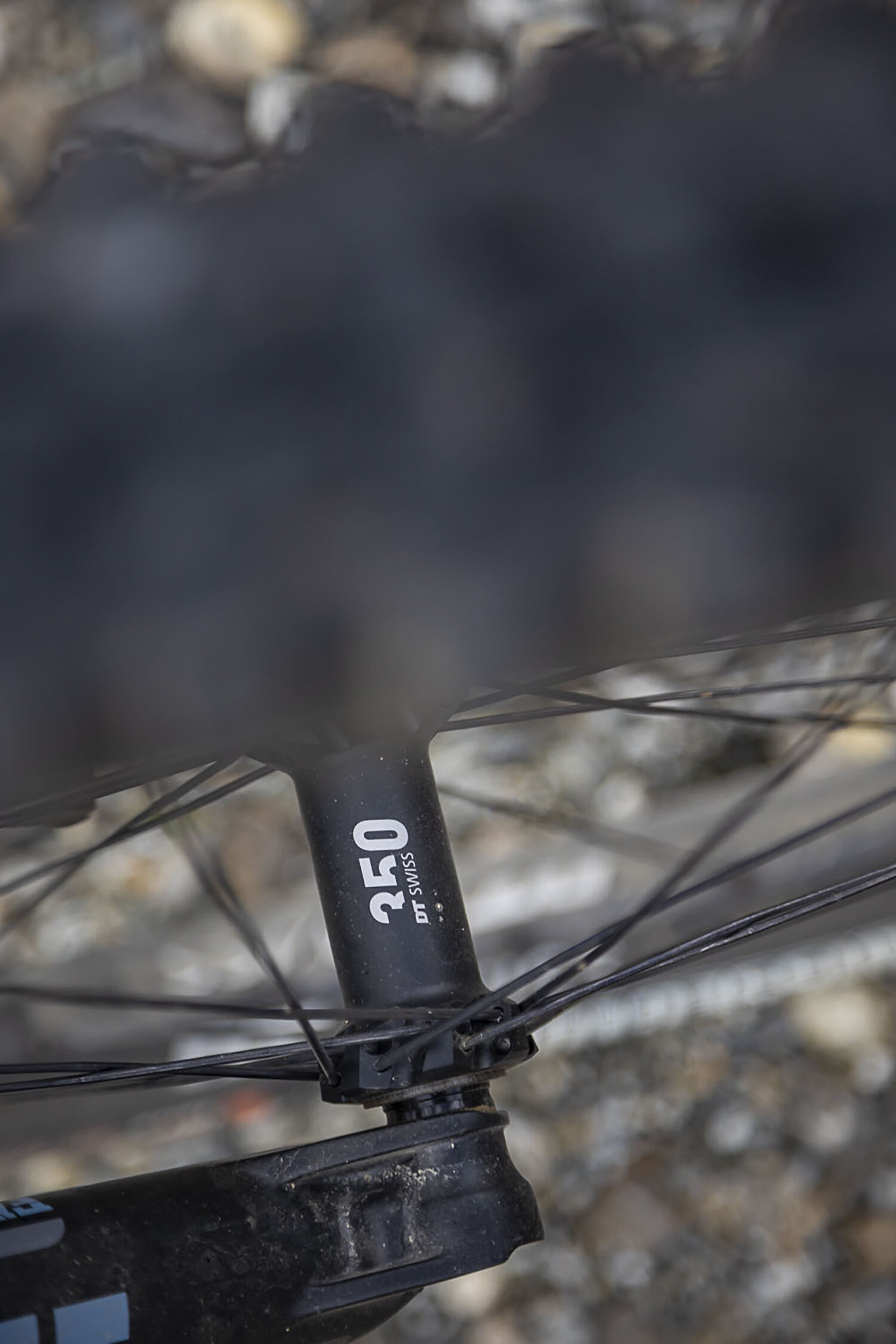 Maybe I’m overthinking this, but the combination of the Maxxis rubber, aggressive geometry and four-pot stoppers all feel like Pivot isn’t trying to make a point as much as an exclamation to ‘just commit’! Lean it over and punch it through the rough, all while holding off on the brakes. If this is what Pivot is aiming for, then I completely concur—for a 120mm travel bike, the 429 is a whole lot more ‘down’ than ‘country’.

All-in-all Pivot has done an amazing job with the 429. The bike feels stealth-like with its progressive geometry and quiet DT Swiss 350 hubs. Pivot even managed to shave 300 grams off the frame alone with this latest version, creating a 12.4kg bike that feels sturdy in the rough, yet still capable of spending all day pedalling from the valley floor to above the treeline.

Of course XC bikes destroy climbs and enduro rigs chew up technical downs, but if you’re the type of rider who likes to push hard on the trail and charge uphill as fast as you can, then a truly versatile bike like the 429 should be on your list for the coming season.