Shimano have released details of the next iteration of their top of the line XTR groupset and in doing so answered the question everyone has been asking: “How will the big S respond to SRAM’s XX1 narrow wide, 11 speed groupset?” The details are below but in quick summary: surprise surprise, Shimano have also launched an 11 speed option with a chainring that features a new tooth profile designed to better retain the chain (but not a narrow wide configuration). 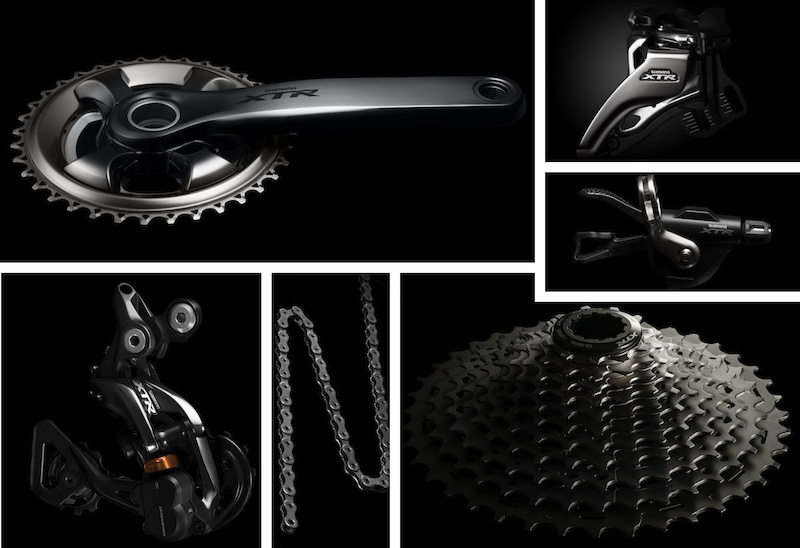 Shimano have also continued the move towards offering both ‘Trail’ and ‘Race’ specific versions of a lot of the XTR components, ‘Trail’ focusing on options, adjustability, and durability and ‘Race’ focusing on weight and performance. Other apparent highlights from the full groupset include; a very high tech front chainring made from a composite of aluminium+carbon+titanium, wheelsets featuring carbon+aluminium laminate rims, and a new ‘side swing’front derailleur that apparently “improves front shifting by 100%”.  I guess the proof will be in the pudding. We’re looking forward to getting our hands on some of these components to put them to the test. In the meantime we’d be interested to hear your thoughts. Have Shimano stepped up to the plate in response to SRAM’s moves over the last few years? 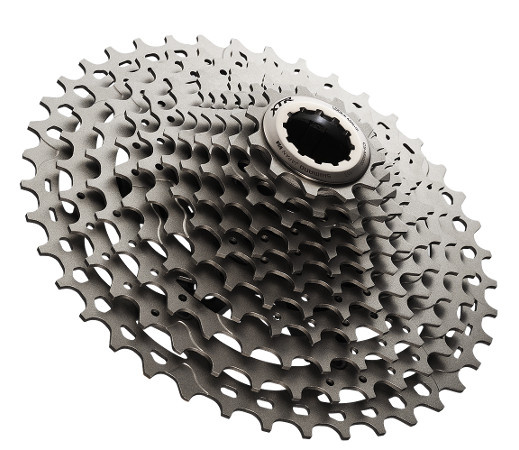 Rhythm is the essence of smooth power transfer and proper gear step is the key to maintaining rhythm over varied terrain. The XTR CS-M9000 11-speed 11-40T cassette is the widest range cassette Shimano has ever produced and also its most balanced. Thanks to its “rhythm step” progression, it maintains calculated, shock-free gear steps from one gear to the next, saving riders energy and helping maintain rhythm on the trail. Key features include:

XTR M9000 offers Shimano’s most responsive mechanical shifting and controlling shifts is easier than ever thanks to a reduction in shift effort by 20 percent. The SL-M9000 shifters feature: With a refined Shadow RD Plus clutch rear derailleur, a new front derailleur structure and a new XTR chain (CN-HG900-11), M9000 offers the most stable drivetrain the industry has ever seen. A new Shadow design optimizes the slant angle, lowering shift effort while improving shifting and driving stability while the derailleur is even lower profile protected further from harm’s way. The new Shadow Plus clutch has a simpler external clutch adjustment, and the derailleur has a wider range of adjustment for easier setup.

Race-tuned power and overall lighter weight thanks to a magnesium caliper and master cylinder as well as a carbon lever blade. With an increased surface area for heat dispersion, Shimano’s FREEZA rotor for XTR-M9000 remains the ultimate in heat control that is now available in smaller size options with a lighter weight spider. The rotor provides a 50° C reduction in heat giving riders more powerful braking and greater durability and longer pad life.

The all-new XTR M9000 wheels mark a serious turning point for Shimano in premium mountain bike wheel sets. They are Shimano’s most advanced mountain bike wheels to date, and also the first featuring carbon laminate rim technology. New XTR M9000 series wheels are even more focused at each end of the spectrum, from ultra-light and durable race wheels to all-mountain tuned trail wheels. All new XTR wheels use 28 butted spokes both front and rear and include a new lightweight bearing and axle system.

Available in both a 27.5 and 29” option, the XTR M9000 Race wheels have a 20mm internal rim width and a new UST tubeless carbon laminated aluminum rim.

Available in both a 27.5 and 29” option, the XTR M9020 Trail wheels have an 24mm internal rim width and a new UST tubeless carbon laminated aluminum rim.

A cosmetic update, lighter rear axle system and a 15mm E-thru axle provide XTR technology at the center of the wheelset.